The Lonely Mountain, or Erebor, is a mountain in the north-east of Rhovanion, source of the river Running, and a major Dwarven stronghold, the most prominent in the story of Middle Earth in the Third Age, whose life extended well into the Fourth Age. After Thorin led his company of thirteen dwarves and a hobbit of the quest to reclaim it from the dragon Smaug and its culmination with the Battle of the Five Armies, Dain Ironfoot succeeded the defunct Thorin as King Under the Mountain, a position he kept until the great battle of the North at the culmination of the War of the Ring, at the same time in which the last defense of the Free People in the South fought the Battle of the Morannon, aiding the destruction of the One Ring. Dain died in battle in front of the Doors of Erebor, and King Thorin III Stonehelm, his son, ascended to the throne.

This bring us to today, where Erebor has become once again a strong and whealthy fortress of the Dwarves, thriving in trade and craftsmanship, a key point for commerce in the North. Many are those who come and go, many are also the guards who stand vigilant in front of the Kingdom’s Doors. This dwarf is one of the guardians of the doors, his role identified by the huge shield he carries, shaped in the likeness of an iron door. His clothing is fashioned for both parading and protection, the violet and gold hauberk covered by an impressive collar plated in gold and enriched with fur, the long cloak also embroidered with metal. Travelers must stop by him in order to get admittance and pass beyone the giant doors of Erebor

What? A dwarf here at Wandering Around Arda? Oh dear! Haha, I have to say this was a good change from my usual themes, and the first time I showcase a dwarf outfit on the blog. But the sight of Dale and Erebor on the test server Bullroarer inspired me. There is some clipping between the shoulders and the cloak, sadly clothing on dwarves tend to clip a lot more than on a man or elf structure. Still I very much like this ensemble, and the violet with the gold. The landscape on Bullroarer’s beta 1 is still unfinished, the inside of Erebor looks like a placeholder, as it is the same hall we have for the Allegiance system, complete with stable npc to go to Mordor. There is no Treasury, no Secret Door, no other passages, and hopefully they will come in future betas. The outside is the same we have in the raid “The Battle for Erebor”. And because I haven’t done a horse and rider outfit in a while, this handsome dwarf is paired with the Steed of Thorin’s Hall. The default color for the horse’s tack is violet, and I like it as is 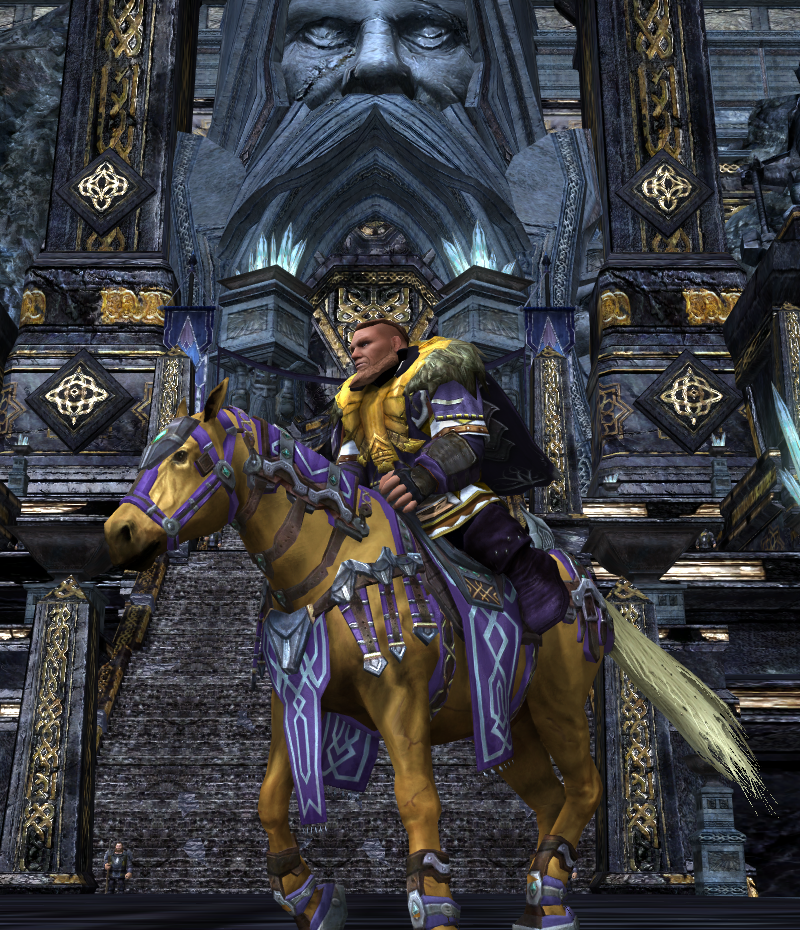 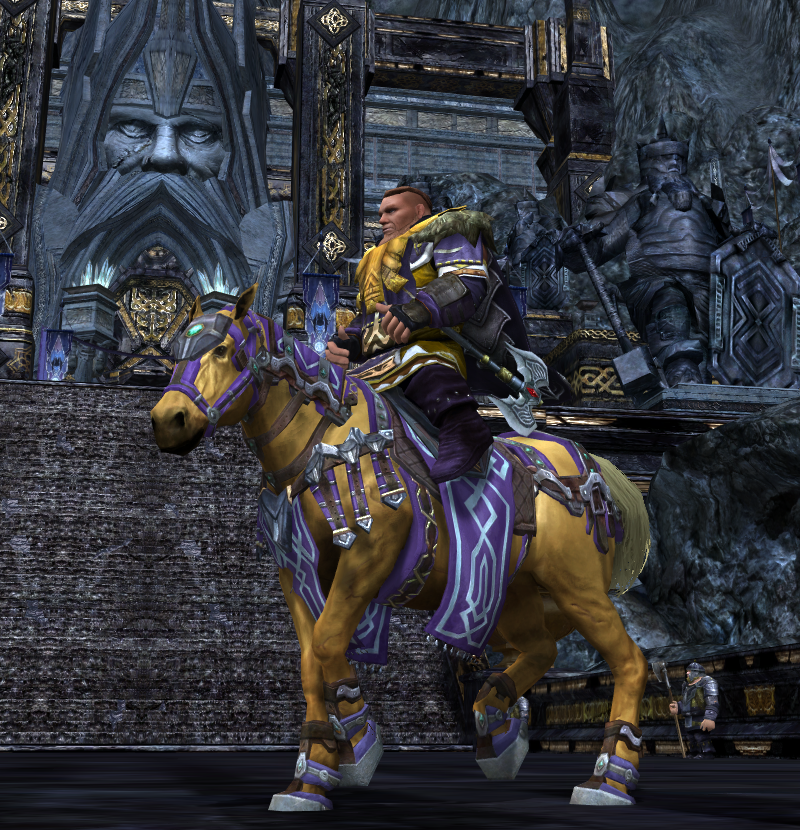