“On these men of the Harp unbidden fell with great eagerness and utterly redeemed the cravenhood of their lord.” The Book of Lost Tales Part Two, The Fall of Gondolin

Thlim Salum or The House of the Harp was one of the twelve noble houses of the Gondolindrim, led by Salgant. Its people were brave warriors, and dressed with tassels of silver and of gold, a silver harp in a black field shone in their blazonry, though Salgant had one of gold. They resisted their coward lord’s orders to stay by him and protect his flee during the Fall of Gondolin, and deserted to aid Glorfindel and the House of the Golden Flower defend the Great Market area of the city. They drove the enemy back into the market as the Orcs pursued Glorfindel, and sadly many of them were burned to death or poisoned by the breath of the Dragons. Salgant himself stayed hidden in his room, it is not known what became of him, maybe he was killed, or was captured and made a buffoon in the halls of Morgoth

When imagining of an outfit for the house of the Harp, I thought full gold, like I did for Thlim Losgloriol. And playing a lay with their beautifuly carved wooden harps. 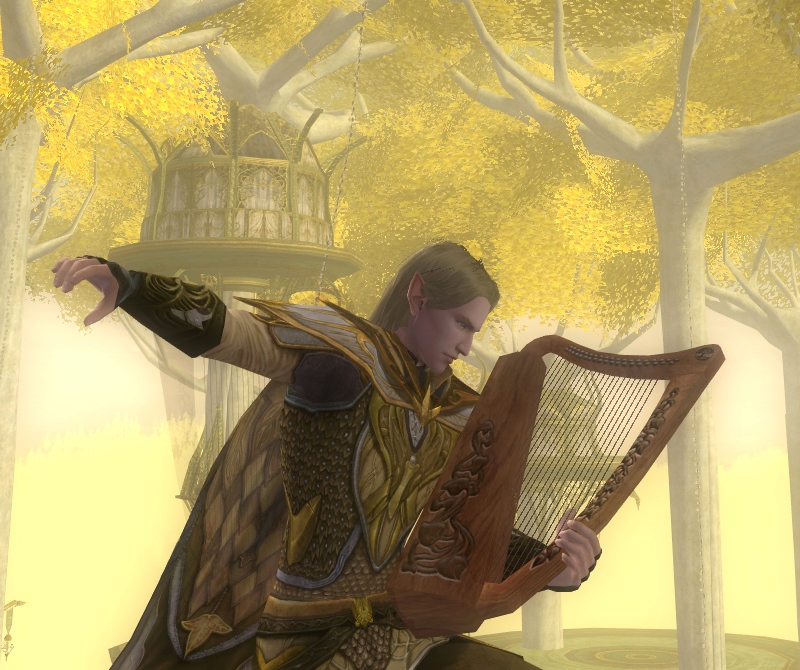 back: Cloak of the Golden Mallorn, gold dye, lotro store

Tags: gondolin, high elf, lord of the rings online, lotro, thlim salumi, use of the harp