The Haven of Pelargir (Garth of Royal Ships) is by far the oldest permanent settlement in Gondor. Like its sister city, Umbar, it was founded by men of Westernesse in the mists of Second Age. Under the command of the Heirs of Castamir and their leader, Balakhôr the Scourge, the Corsairs have sailed north with the full might of their fleet, smashing through the gondorian defences and seizing Pelargir. But even as the city burns, a mysterious host is approaching from the West: Aragorn, son of Arathorn, has rallied the Oathbreakers of the Paths of the Dead alongside the Grey Company and the brave soldiers of central and western Gondor led by Angbor to storm Pelargir and drive the Corsairs back into the Anduin. The Sons of Elrond lead a small party of brave warriors through a hidden entrance in the sewers of the city in order to open the main gate for the Grey Host to advance into the city (lotro wiki).

After the pillaging left the haven in wrecks, whomever is left in the harbor is taking steps to rebuild. This soldier has taken up watch at the wharf, where the vessels used by the corsairs are moored. There might still be some wayward corsair on board, if so he is ready to signal them to the guards

I quite like the new farmer’s faire tunic, dyed in more muted colors it’s great for rugged, outdoorsy outfits, but I wanted to add a touch of color and make my ensemble a bit more “city like”. Pelargir is the most prestigious harbor of Gondor so I figure the uniforms should be a touch on the fancy side. I’m pleasantly surprised at how well it combines with the cloak from Minas Morgul vendors, even better than the cloak that goes with the tunic imo. 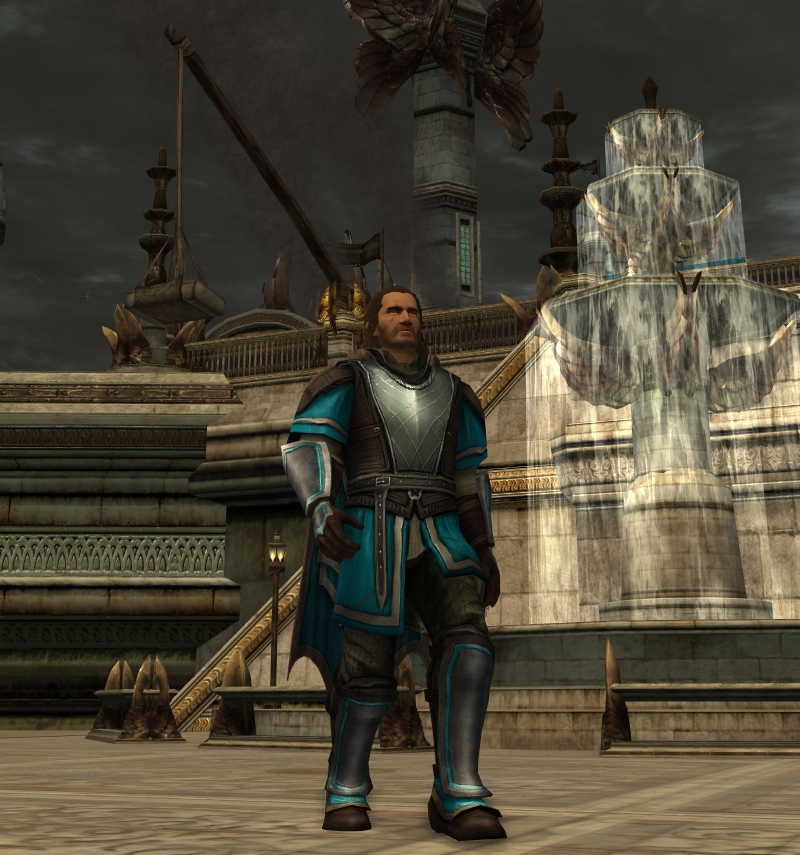